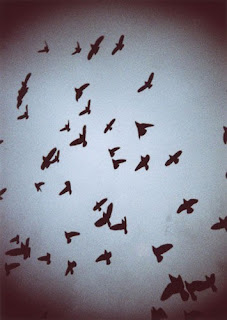 I want to fly with the larks,
who rise in exaltation.

They know Your secret name
and sing it, each one -

An ascension,
into the vastness
of sky and wind.

a psalm
a song
a glory

I missed the launch. This should not surprise anyone.

Yesterday was the beginning of the month of Nissan, and thus, the launch of #BlogExodus, a creation of my friend Rabbi Phyllis Sommer. The trick is to write, blog, post, snap or chat, based upon a prompt that she has provided, for the fourteen days that lead up to Pesach (Passover) and the Exodus.. Yesterday, being the first of Nissan, the prompt was "Launch."

As I said, I missed it. Oy. Well, almost missed it, if I can eke out a few words on the prompt before sundown. Glory be - Jewish days always begin at sundown (thanks to the original launch, otherwise known as Creation, where we read "it was evening, it was morning; one day"). Which, according to the prophet Google, is at 7:14 pm. So, I have plenty of time.

Which brings me back to "launch," and missing it - or just barely making it. I tell myself that I hate being latte, which I do. Late always meant sitting on the curb in front of the school, its windows dark and the sky going that lovely shade of gray just before dusk, waiting. I felt like Godot, every time, and wondered, will this be the time, out of all the times, that they forget to pick me up? They never forgot. They were just always late. So my mantra has always been "I'd rather be three hours early than 2 minutes late."

And I have awesome intentions of being on time. And I mostly am. But more and more these days, I run late. And the simply late is morphing into the merely late, into the very late, more and more often. So late, that I ran the risk of missing the launch altogether.

Which may not be a bad thing, in this case. One, I write better (so I like to think) under pressure. I hate having a blank screen to stare at, with nothing but time between me and the pixels. I spend most of that time writing and deleting the first sentence of the thing I think I am writing. My Editor, the one who lives in my head, has a veritable field day on those days. I don't have the time to dust off the eraser when I'm pushing a deadline (mea culpa (if I can borrow the phrase) on all my various typos and grammatical vicissitudes).

Two, though, now that I know I'm running late, racing for the launch (so to speak), I got to thinking about our ancestors of way back when, when they really were fleeing - and fast. And what about anyone who might have been late?

Timing was tight, I think. We go from the actual passing over of the Angel of Death at midnight, to taking up their clothes and possessions, their cattle and goats and sheep, along with their bread before it was leavened, to "borrowing" the gold and silver from the Egyptians, who were weeping and wailing at all the death, to the journey itself - all those people, all those kids. Obviously, they had different kinds of kids back then - I have one (got a perfect one on the first try), and I have tried to leave lickety-split with him from infancy on, and quick - let alone orderly, with everything one is supposed to take for even the shortest journey on the first try - is a miracle of the highest order. For me, it was a miracle I could only dream about.

So maybe I re-think the "timing was tight" thing. There was a helluva lot of movement happening, and even more moving parts. Pharaoh was (I presume) still in dazed mourning, so he wasn't yet amassing his hosts and their chariots. Still, with 600,000 men, plus the women and kids and anyone else - that's gotta take a helluva lot of time to communicate, coordinate and commence.

It had to take some time to launch. And so maybe everyone launched together. Maybe everyone got it together, so if little Joshua forgot his pet lamb, certainly his cousin Ya'akov would grab it. And maybe Yael really needed to polish her cymbals, so Ruchel packed up the last of the plates and cups. And they all knew, once they got where they were supposed to go, it would all get sorted out in the wash.

Still, there had to be someone who was late. Someone who wasn't quite as organized as her neighbors; someone who had a few extra treasures he wanted to bring - a rock that looked interesting, that would remind him of the home he had made in these Narrow Places, or an embroidered tablecloth that had been handed down since the last time they were in Canaan. Or something. Someone of those 600,000-plus people had to have been late.

So, today, the first of Nissan, we launch into our journey, some together, some rushing to catch up.

I'll meet you at the Sea, timbrel in hand xoxo

For anyone interested in Blogging Exodus, here are the prompts Rabbi Phyllis has created: 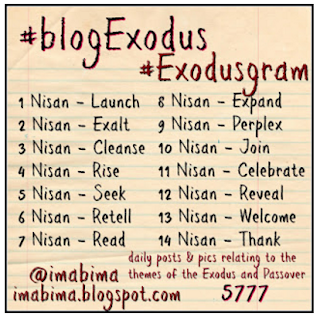 Posted by Stacey Zisook Robinson at 6:51:00 PM No comments:

For Vashti, who danced

I remember when he crooned,

Come, dance for me!
And I would,
just for him.

And later, he moved
with me,  a different kind
of heat, and he called me
his queen.

When did crooning
turn to calling,
and calling to demand?

Dance for me, and move
your hips,
and wet your lips
and come - as if I were
his pet, a bitch to lap up

praise from her master,
kept on a collar and leash.

But I am queen.

I am fire,
and water,
and lithe.

I will not dance
when you call.

Posted by Stacey Zisook Robinson at 8:33:00 PM No comments:

Do not give me equal rights.
They are mine already.
It is only up to you
to recognize what is

Mine, already -
what you have so brashly
so brazenly accepted as your
own, and only your own,
for as long as
forever has been.

And I will not wait,
not any longer,
for your generous act of
recognition - as if you were
bestowing a gift, or an offer
or a Right -
because gifts can be
rescinded, or taken
away by the giver,
even when it was
never yours to give,
not since forever
and ever has been.

I am American.
I am,
I am, and
I will wait no longer
for the rights that are mine
and are mine simply because
I am.

in honor of #Internationalwomensday

Posted by Stacey Zisook Robinson at 2:45:00 PM No comments:

A Handful of Stones

You were laid, just so, in the damp heat and cicada song
of summer. Now, so unlike your sleep, always tangled and damp, there is precision in your rest. Yet today there is nothing stately in our shared unrest: all this felled granite - a suddenness of violence; a riot of grey. I meant to visit you sooner, to bring you a handful of stones. I meant to grieve more softly, but the chaos has made my grief razor sharp again. Now there is no place to leave my offerings.
Posted by Stacey Zisook Robinson at 8:32:00 PM No comments: